You are here: Home / IBEW News / Advancing the Role of Women in NB’s Nuclear Industry 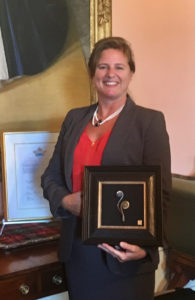 IBEW Local 37 is very proud of our member, Bernice Lanigan, for being honoured at the 2016 NBCC Alumni Recognition Awards held in Fredericton.

Bernice was the recipient of NBCC’s Signature Award: Friend of New Brunswick which recognizes an alumna or alumnus who has made significant contributions to the culture, reputation, and/or economic prosperity of the Province of New Brunswick.

Bernice has been employed with NB Power for 25 years at Point Lepreau Nuclear Generating Station. During her career with the company, she has worked in various roles including chemistry, nuclear oversight, environment and now training.

She has been called “a trailblazer in New Brunswick’s nuclear sector” – spending her career raising awareness of the role women play in the nuclear industry. In 2007, she founded the Women in Nuclear (WiN) New Brunswick chapter and introduced the first Networking for Young Women Dinners which has evolved into the Trades & Tech Gala for Girls. She has received WiN-Canada’s Leadership award, YWCA’s Women of Distinction award, and is an active member with the 100 Women Who Care-Saint John group. #NBPROUD #WiN

Thank you Bernice for you outstanding work and dedication!