When Fredericton, New Brunswick, Local 37 Business Manager Ross Galbraith learned NB Power had won Canada’s Best Health and Safety Culture award for 2016, he was happy for their achievement, but not especially surprised.

Over his career, Galbraith, who is also a member of the International Executive Council, has worked diligently with the Local 37 membership and leadership to make safety the local’s top priority. That work has been reinforced by New Brunswick Power, the local utility which employs roughly 90 percent of Local 37’s members.

“There are a lot of things that go into being a good union member and a good employee, but nothing is more important than working safely so you can come home to your family at the end of a long day,” Galbraith said. “And our members have really embraced that.”

The award, given out by Canadian Occupational Safety Magazine and WSPS, a safety and risk management consultancy, is the top prize in the Canada’s Safest Employers competition. It’s unique in that it not only recognizes safety efforts by the company, but it’s partly chosen based on results of employee surveys that measure how deeply the concepts of health and safety have permeated the culture of the workplace.

“For our members at NB Power to have earned this prize is recognition of the pride they take in their work and the commitment they have to their own safety and to the well-being of their union brothers and sisters,” Galbraith said.

For Gaëtan Thomas, president and CEO of NB Power, the prize is fantastic, but he doesn’t want his workers to believe they are Canada’s safest.

Duff Boyd, NB Power’s director of health and safety, told the magazine, “Of course job competence is important, but how you get the work done, for us, is far more important than how fast you get it done.”

Company executives cited their partnership with the IBEW as a major factor in creating the safety culture that led to the award, principles outlined in a document called the NB Power/IBEW Shared Commitment to Safety.

The commitment, which codifies the employer-employee consensus on six key elements of the safety culture, grew out of a Canada-wide effort from utility locals to share information about workplace accidents and to strategize about how to prevent them altogether.

Local 37 President Steve Hayes, who co-chairs the meetings alongside Edmonton, Alberta, Local 1007 Treasurer David Halbauer, said the idea came after an All-Canada Progress Meeting four years ago, when an accident was reported but no one asked about the details.

“A few of us thought we needed a place to just focus on safety – no contract talks, no politics, just safety,” Hayes said. The group called itself CUSP, the Canada Utility Safety Program, and in June the group of 30-35 representatives from utility locals will hold its 10th meeting in Alberta.

“It’s informal, but it’s a place where utility locals can get ideas from one another and share information about how we’re each handling safety with our local utility companies and find out what’s working and what’s not working.”

The NB Power/IBEW Shared Commitment to Safety, Hayes said, grew out of an idea that was shared at a CUSP meeting by representatives from Vancouver, British Columbia, Local 258, who had developed a similar document with BC Hydro a few years earlier.

“We liked the idea, and we took it to NB Power, and they liked it too,” Hayes said, “and it’s paid off in this award.”

The document’s six key points, which IBEW members and NB Power managers adhere to are:

Having it in writing helps to ensure there’s a full commitment from both sides, said Galbraith, who also undertook an effort last summer to do the same for the IBEW’s Code of Excellence.

“We wanted to find out what excellence meant to our members,” Galbraith said, “and we wanted to make sure that they were the ones leading the charge when it came to the Code of Excellence and how they could apply that to their jobs on a daily basis.”

So Galbraith put out a call for volunteers, and about 80 members participated in a series of focus groups about what the five elements of the Code meant to them. Those foundations – safety, professionalism, accountability, relationships and quality – are captured in the acronym SPARQ, which is part of a union-wide effort to make the ideas behind the Code more relevant to everyday workplace situations.

“We stayed true to the foundational values of SPARQ, but rather than using someone else’s definition of what excellence in those themes looked like, I wanted our members to identify their own picture of excellence,” Galbraith said. “Excellence means different things in every branch and at every local, so we wanted to tailor it to Local 37, and these meetings were how we achieved that. We asked these groups, ‘What makes you proud to be an IBEW member?’ and they came up with the descriptors for each of the five elements of the Code.”

Presentations on the Code, and those definitions, were rolled out in more than 70 group meetings, held from last December through February, and printed on cards and posters, which were distributed to each of Local 37’s more than 2,000 members.

The first bullet point for ‘Safety,’ states, “We make safety our No. 1 priority.”

“This award for our members at NB Power shows they’re living up to that commitment,” Galbraith said. “We’re proud of that, and we’re going to keep working to do even better.” 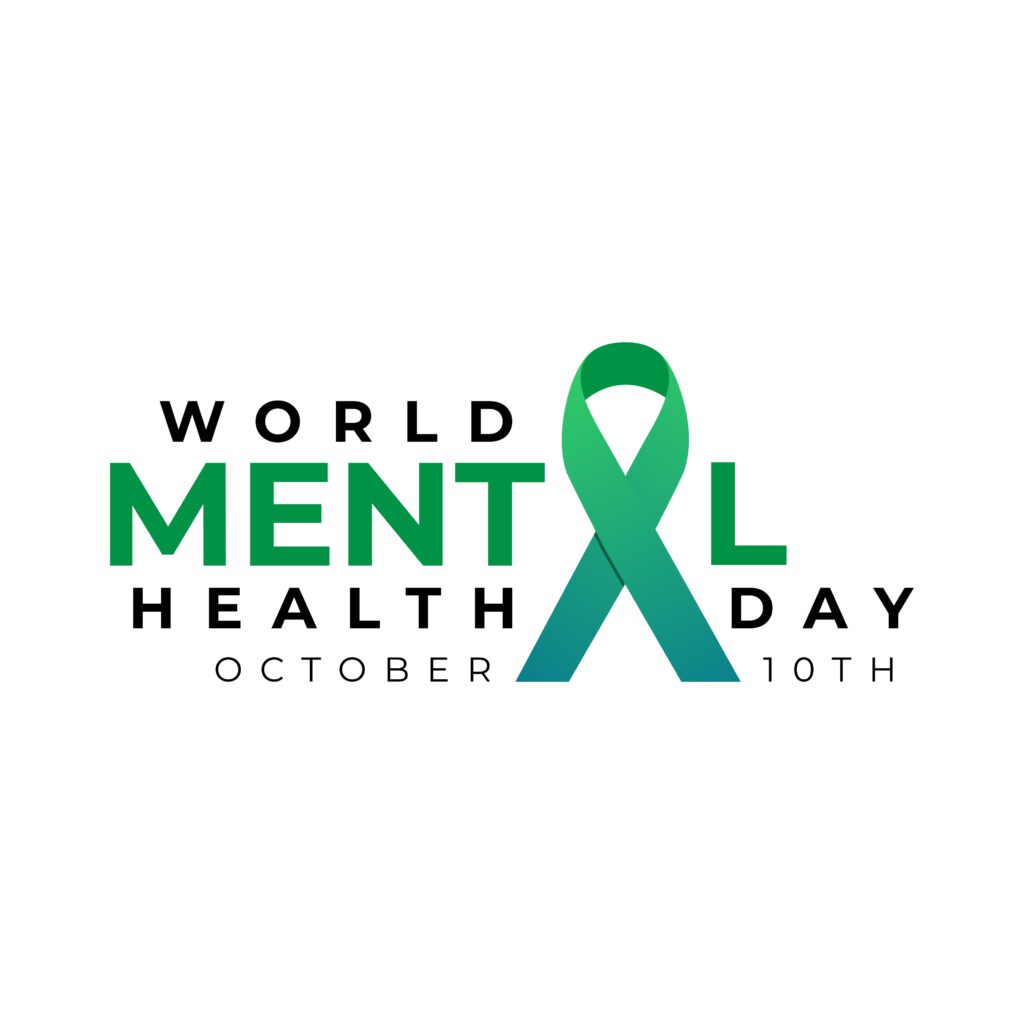 is observed on October 10th every year to help raise awareness of mental health issues around the world, and mobilize efforts in support of making mental health care a reality for all.

And for the first time ever, the
World Health Organization (WHO)

For more information about The Big Event and how to participate, please click the link:
https://www.who.int/…/the-big-event-for-mental-health

The IBEW is offering a series of virtual events to educate and engage women as leaders and activists. The kickoff is scheduled to take place Friday, October 9, 2020 at 1 pm EDT. The virtual series includes a variety of workshops as well as North America’s Building Trades Unions Trades Women Build Nations (TWBN) virtual conference.

All of these sessions are FREE to attend. If you are a member of the IBEW and would like to participate, simply send us an email (local37@ibew37.com) and we’ll send you the Zoom link the register.  Once you’re registered, you will receive the links to attend the workshops, as well as the registration links for TWBN and Tradeswomen Voices.

Here is the entire schedule (all times are Eastern Standard Time): 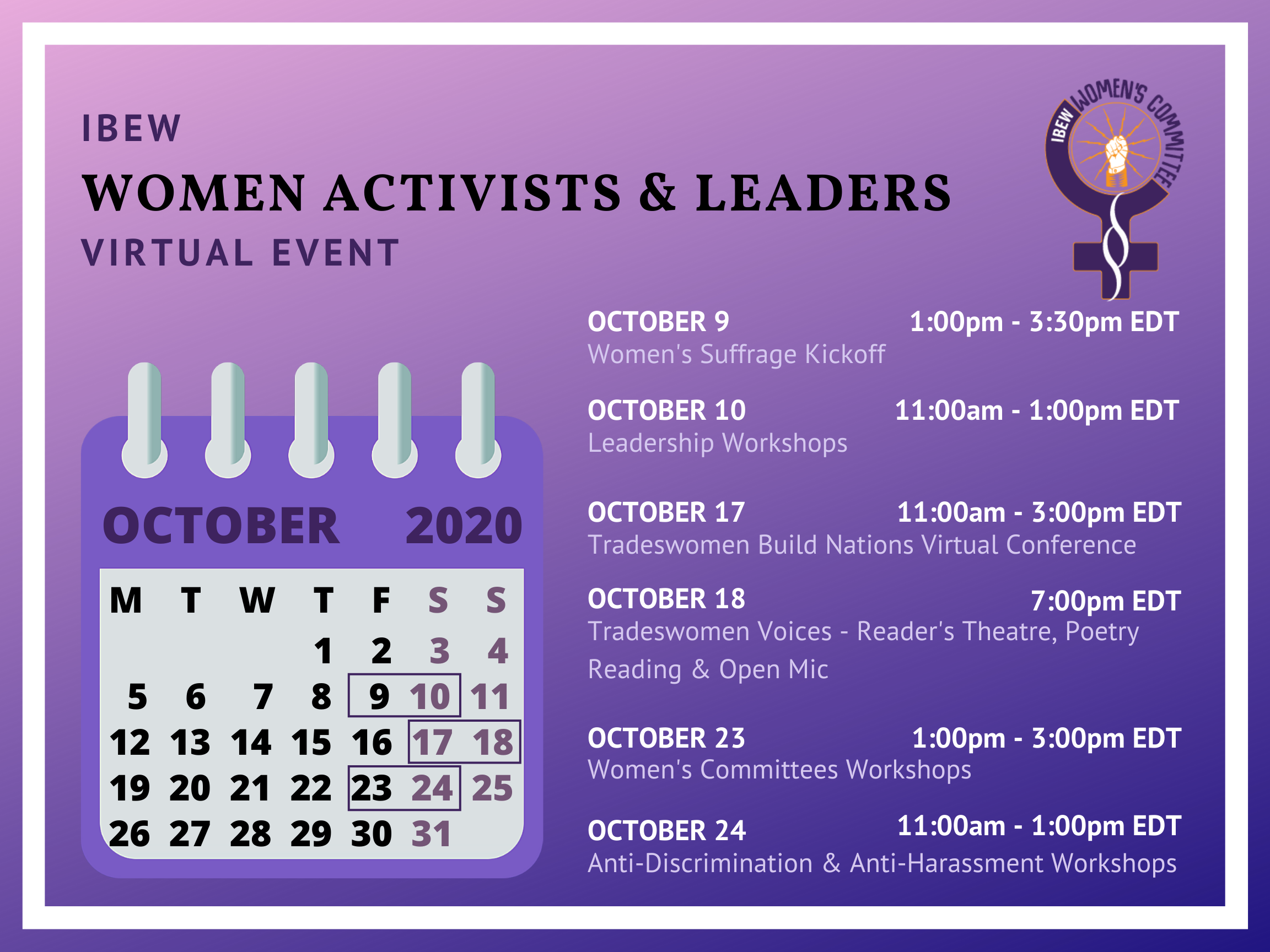 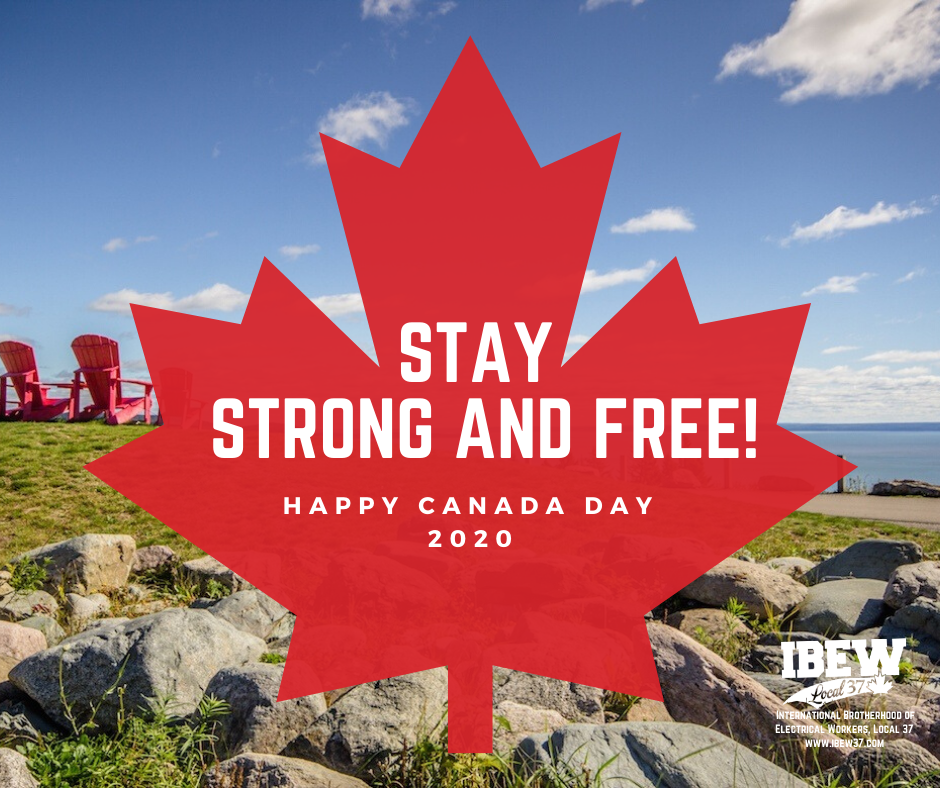 Wishing everyone a very safe and happy Canada Day!

On behalf of the First District staff, I would like to take this opportunity to wish you and your families a very safe and happy Canada Day.

I know that it won’t be the typical celebrations that we are used to, but together with the strength and support of each other we can make it through these difficult times.  As we navigate through the unprecedented worldwide pandemic and bear witness to the wide spread civil unrest in the United States and countless other conflicts around the globe it is comforting to know we live in the best country in the world.

Please take some time to get some much needed rest and celebrate with your loved ones, but please do it safely by adhering to your local, provincial or federal health officials guidelines that are in place where you live.

Thank you for all that you do for the benefit of our members, the advancement of the IBEW, the labour movement, and society as a whole.