A random draw was made the morning of February 22, 2019 at the First District Office, Tom Reid has the pleasure of announcing the following winners:

Congratulations to these five applicants!!!

The First District Office, and the other sponsors (TD Insurance Meloche Monnex, MWG Apparel and AIL) wish these dedicated young people a successful year in their continued education.

Sébastien is currently attending, and will return, to Université de Moncton in the fall for his second year in the Education program, once completed Sébastien will teach primary grade students.

IBEW Local 37 wishes both Sébastien & Julianne all the best in reaching their goals and continued success in their studies.

Close to 100 Canadian IBEW sisters came together for the 2019 IBEW Canada Women’s Conference this past November. It was a weekend of celebrating women in the labor movement, discussing ideas and opportuntities, networking,  and forming new bonds with members from across the country. For conference highlights, be sure to check out this excellent video:

IBEW Local 37 has recently formed a women’s committee. If you’re a member and would like some information about getting involved, please send an email to mary@ibew37.com. 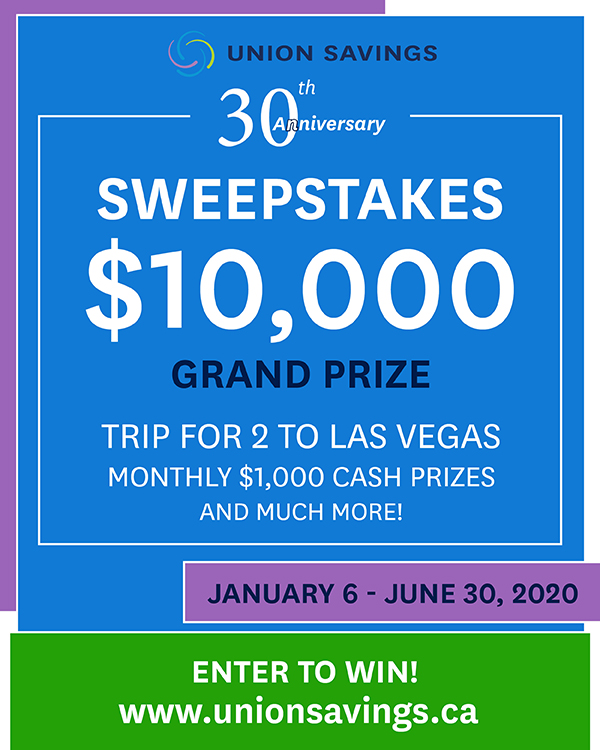 Union Savings is celebrating its 30th Anniversary with awesome prizes and giveaways!

If you’re a member in good standing* with IBEW Local 37, you can enter to win the grand prize of $10,000, a trip for 2 to Las Vegas, monthly $1000 cash prizes, monthly additional prizes, and much more!

ENTER TO WIN by visiting https://unionsavings.ca – and while you’re there, don’t forget to check out how you can save on travel, entertainment, fashion, skincare, insurance, and more.

*Members in good standing have completed and returned an IBEW membership form and are up-to-date with their dues. Not sure if you’re in good standing? Call or email the IBEW37 office: 1-877-437-0037 / info@ibew37.com